This is part of a series of posts analyzing about 1 million games of Dungeon Crawl Stone Soup. Check out the crawl-coroner project on GitHub for more information.

A "newbie trap" is an ill-advised gameplay decision that inexperienced players are likely to make because they don't know any better.

For example, before version 0.14, the entrance to the Orcish Mines would appear between levels 6-11 of the dungeon - on average, earlier than the less-deadly Lair of Beasts. Experienced players (and those who read walkthrough guides) knew to look for the lair first, and backtrack to the mines later. Newbs would go straight into the mines and get crushed.

In this post, I'll try to use data to test the validity of some putative newbie traps.

I assigned each player a smoothed winrate estimate - see this post for more details.

I associated with each game the winrate estimate of the player, and then partitioned the games according to quantiles of the smoothed winrate.

For each 'trap', I'll be comparing behaviour between these slices, either all simultaneously, or pitting some of the bottom range against the top (e.g. the bottom 25% vs. the top 10%).

Are newbs more likely to optimistically quaff potions of mutation, or eat mutagenic meat, hoping for some beneficial mutations? 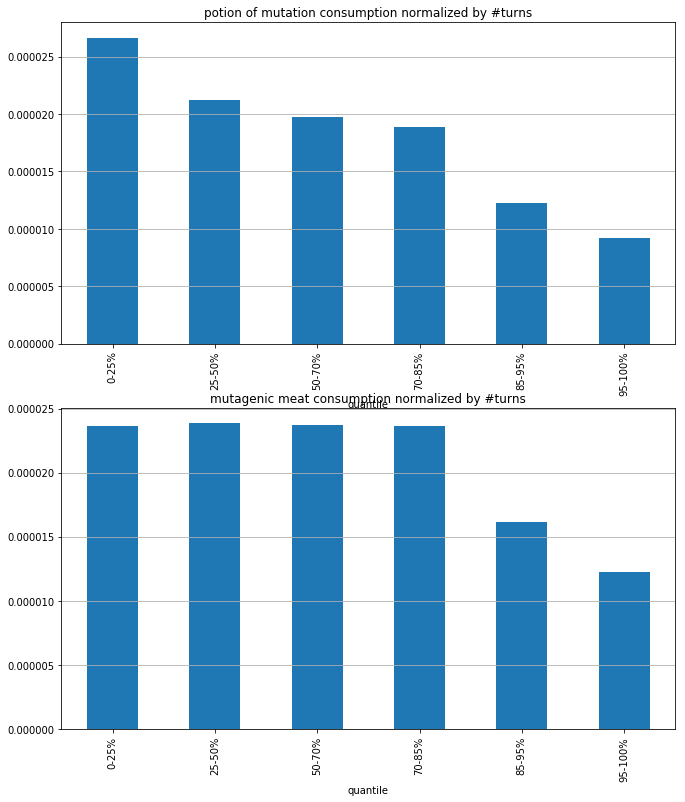 Seems like a pretty clear trend! The top 5% of games in particular involve half as much mutagen consumption per turn as the bottom half.

On average, the games on the far right are lasting a lot longer than the ones on the left. If all players liked to quaff a bunch of mutations early on and never again after, then normalizing by number of turns would have the effect of making longer games seem less mutation-happy.

Just to be safe, let's control for this. I'll fix some turn count N, and ask: of the games that last at least N turns, how many potions of mutation are quaffed before turn N? 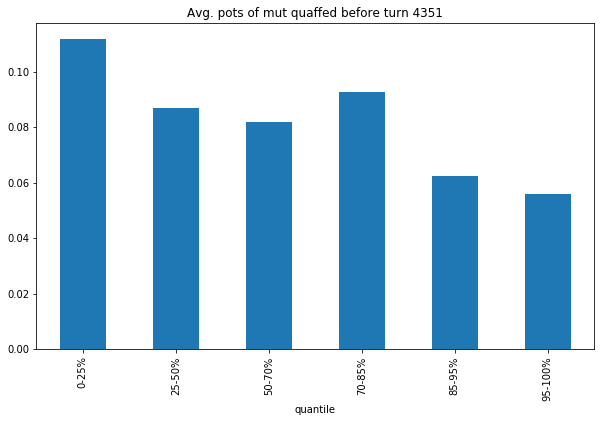 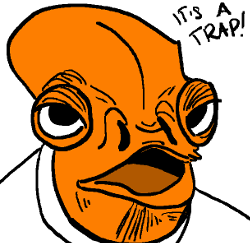 A thread in the Tavern asks Why do new players invest so many XP into spellcasting?, pointing to a CiP post as an example. Some suggest it's because newbs don't understand what the skill does, or that automatic XP assignment tends to favour it. Others are skeptical about whether this is truly a newbish trait. 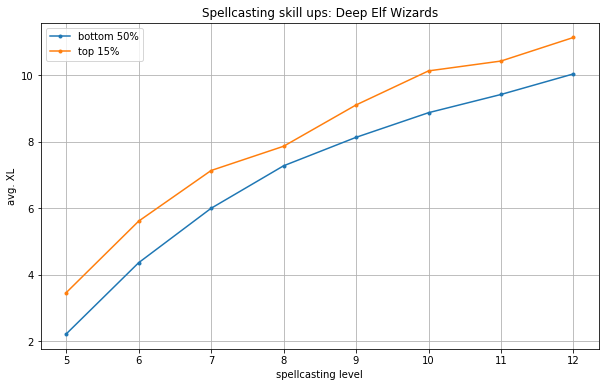 (Note that skill level is on the x-axis and player level on the y-axis. The transpose seems more natural, but this arrangement better reflects the underlying data. Morguefiles give the player level (XL) when each skill levels up, not the other way around. Technically each point should be read as "of DEWz characters that reached Spellcasting level x, the average XL at which they did so was y")

Let's throw together a bunch of popular caster species and backgrounds, to make sure this isn't a fluke specific to DEWz's. This'll also give us a big enough sample to extend the comparison to late-game. 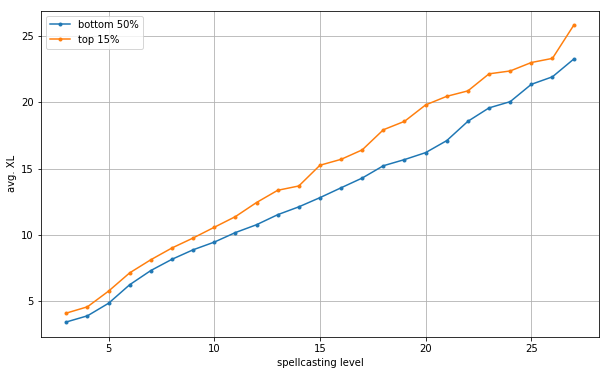 Wow! The gap just gets wider. Around the mid-to-late game, the bottom half are hitting spellcasting milestones 3-4 levels earlier than their high-winrate counterparts. That's huge!

In an earlier post analyzing species, I speculated that Octopodes' last-place win-rate might be because they're attractive to newbs. (Granted, they're a weird species with a very impactful limitation - no armour. But they're easy to grok, and the promise of getting to wear 8 rings is a cool hook.) 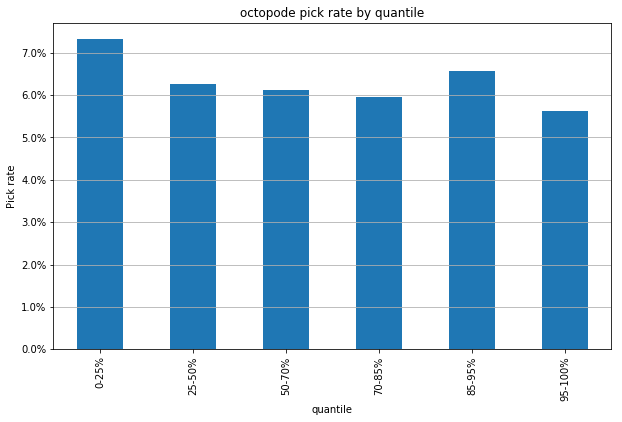 This is vaguely consistent with my hypothesis, but the difference from one end of the player base to the other is not huge, and the second most prestigious group has the second-highest pick rate. 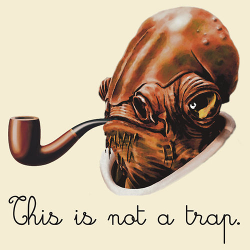 I also speculated that Deep Dwarves may have the highest win rate of all species because they're the opposite of a newbie trap. They're a mechanically tricky species with a very intimidating constraint (no HP regeneration). Maybe only veterans are confident enough to play them. 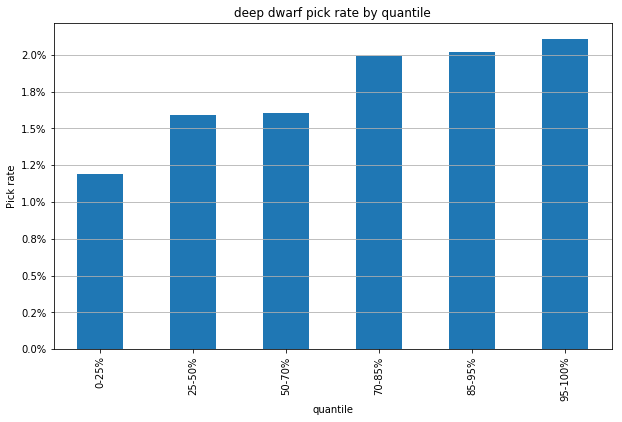 One interesting thing to note is that the players in the bottom quarter here are actually not likely to be newbs in the literal sense.

A couple months ago I introduced my boyfriend to DCSS, and it's been a lot of fun watching him progress. He's committed to not reading spoilers until he's won a game, so he's a great subject of observation when it comes to newbie traps.

He recently got his first rune ever. How he managed it at level 15, I have no idea. I was playing a Deep Elf in parallel with his, and I picked up my first rune at level 18, after having cleared the Dungeon, the Orcish Mines, and the first 3 floors of the other S-branch. He cleared up to D:9, cleared the Lair, then waltzed straight down to the bottom of the Swamp.

I would guess that this is not an uncommon mistake. When you get to a staircase, the natural thing is to go down it. Incrementally clearing and backtracking isn't an obvious strategy. And the spike in danger of the final floor of a branch is something you either read about, or learn from painful experience.

(This tavern post has a cool idea about restructuring the dungeon to make this less of a trap.) 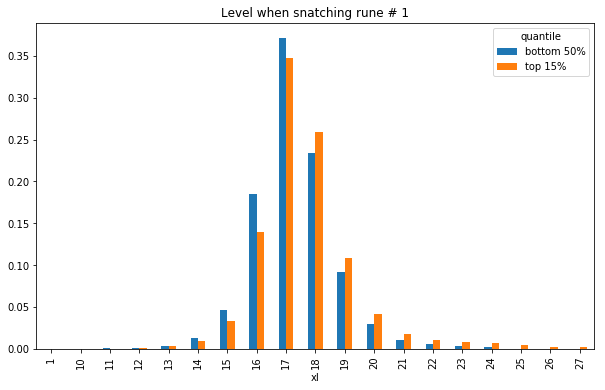 Level 15! Damn falsifian, you were really on the scary side of the bell curve.

XL isn't a great universal scale for how advanced a character is, because of differences in XP aptitudes between species. Let's generate the same graph from just deep elf games as a sanity check. 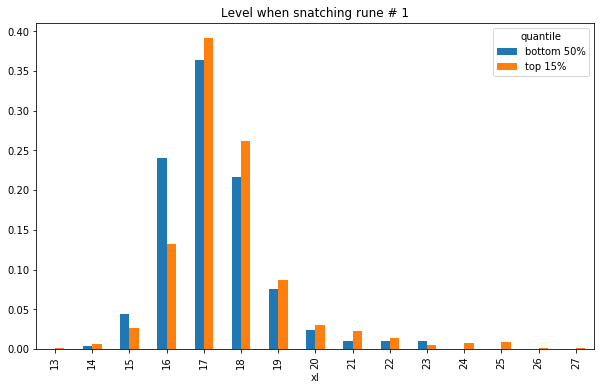 Still quite a clear difference! 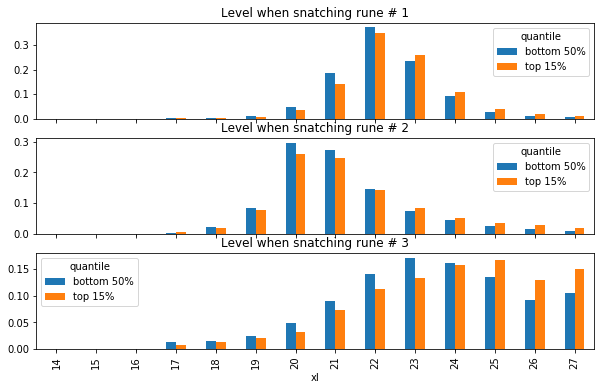