This is part of a series of posts analyzing about 1 million games of Dungeon Crawl Stone Soup. Check out the crawl-coroner project on GitHub for more information.

It sure would be useful to be able to assign to each DCSS player a measure of their skill.

Why? Let's say we have some hypothesis about some gameplay decision, like...

The problem with this approach is that it uses a signal (wins) which is sparse and noisy. Sparse because DCSS is a hard game. On the whole, less than 1 in 100 games results in a win. Noisy because games involve a lot of decisions (and randomness). The effect of any one decision on whether that game is won is going to be pretty small.

In some cases, we might find it easier to just ask what skilled players do. "How often do strong players take the Abyssal rune as their third?" "Do strong players specialize in maces more often when playing GrFis?"

By assigning a varied range of 'skill' scores to players, we no longer have the problem of sparsity. Even if games A and B were both lost, we can say that A was 'better' if it was played by a player with a 5% win rate, and B was played by someone with a 0.5% win rate.

(Also, knowing whether a particular behaviour is strongly associated with experienced/inexperienced players is interesting in its own right, even if we're not trying to make any claims about a causal effect on winning.)

The most obvious measure of player skill would just be their raw win rate: n_wins / n_games.

However, as I showed in my post on Players of DCSS, the distribution of winrates is spiky.

On the low end, it's concerning that we're assigning the same score of 0 to over 90% of players. Intuitively, it seems like there should be room for differentiation among those who have never won a game. Player A, with 0 wins out of 300 games should probably be ranked lower than B with 0 wins out of 2 games. We have pretty strong evidence that A has a low winrate. But B's record is not at all inconsistent with them having, say, a 10% winrate.

On the high end, there's reason to be concerned about artificially high win rates. We have 37 players with a 1 win 0 losses record - if we made them play 10 more games each, do we really expect they would win them all?

This is basically the same problem as sorting starred product reviews. The bread machine with a single 5-star review should probably not be ranked higher than the one with 100 reviews averaging 4.9 stars.

I'm going to try to estimate each player's 'true' win rate - i.e. the proportion of games they would win if we sat them down to play DCSS for eternity.

Before I get into the math, it's worth pointing out a few (shaky) assumptions I'm relying on.

My model assumes that each player has a fixed 'true' win rate, and that each game played is an independent Bernoulli trial. Baloney!

Players probably tend to improve with experience. (We could try to account for this by assigning players a series of win rates, by applying a moving window to their game history, with the contribution of a game decaying with its distance from the focal game.)

In the abstract, the goal of DCSS is to win. Therefore, by definition, player A is better than player B if and only if they are more able to win the game.

Where does this fall apart? The Crawl community values versatility. The prized titles of "great/greater player" have nothing to do with winrate - they're earned by winning a game with each species/background.

We could try to make our definition of DCSS skill better match the community's, by defining it as a player's ability to win the game, averaged over all species/bg combinations. But this would make things a lot more complicated - now we're estimating ~262 parameters per player, rather than 1.

A simpler way to account for this would be to assign a different prior to each game according to the chosen species and background (e.g. the win rate over all games is 0.74%, but for just Minotaur Fighter games, it's 1.17%). This could even take into account the game version. The effect of a given game on a player's score would scale with how surprised we are at the outcome. A MuWn win might be worth more points than a MiFi win. And a MuWn loss might have a less negative effect on a player's score than a MiFi loss. This wouldn't explicitly reward versatility, but it would at least avoid punishing it.

Many would also agree that, all else being equal, a win is more impressive that...

Assumption 3: Players are trying to win¶

The fact that players ever choose challenging starting conditions (e.g. Mummy Wanderer) already shows they're not simply trying to maximize their chances of winning. Also...

We rejected raw win rate because it gives some dumb estimates to players with a small number of games played, such as giving a 100% win rate to players with a record of 1 win 0 losses. What allows us to call that dumb? We have some prior knowledge of win rates. We know that DCSS is a hard game, and that a win rate over 90% is very unlikely - much less likely than the player having a 1% win rate and getting lucky on their one game.

An alien observing a coin coming up heads 4 times out of 5 flips might guess that the coin has $P(heads) = .8$. This is the parameterization that maximimizes the likelihood of that observation, so it's a good guess if you have no idea how coins work. On the other hand, someone who's flipped a lot of coins might guess that $P(heads) = .5$, based on a strong prior belief that coins are usually fair.

Let's try to come up with a concrete representation of our prior belief about DCSS win rates.

By a prior distribution on win rates, we mean some function that, given a win rate, tells us how likely it is.

Beta distributions are defined by two parameters, $\alpha$ and $\beta$. The mean is given by

Let's call the mean of our prior distribution $\pi$. We can equivalently define a unique Beta distribution by choosing a value for $\pi$, and for a 'concentration parameter' $C = \alpha + \beta$.

$C$ controls the strength of our prior belief. The higher $C$ is, the more tightly our distribution will concentrate around $\pi$.

(This reparameterization will turn out to be useful in a moment.)

After observing a player play $n$ games and win $w$ times, we'll get a posterior distribution over that player's win rate, which combines our prior belief about win rates in general with the new evidence we've seen about this specific player's ability.

I won't go through the derivation here (check out this wiki article if you're interested), but it turns out that the posterior we get is just another Beta distribution, with $\alpha = \alpha_{prior} + w$ and $\beta = \beta_{prior} + n - w$.

The mean of this posterior distribution, our win rate estimate for this player, is

Which can be rewritten as...

A simple way to think about this is that, when calculating this player's (smoothed) win rate, we're padding our calculation with $C$ additional games ("pseudo-events") having win rate $\pi$.

For $\pi$, I'll just use the win rate over all games in the dataset (0.74%). I could also have gone with the "macro-averaged" win rate (the average win rate across players - an average of averages), which is about .1% lower. If number of games played is independent of win rate, these should both be unbiased estimates, but the former should have less variance. (Unfortunately, we have pretty strong evidence that there is a positive correlation between winrate and number of games played, so our estimate is probably too optimistic.)

$C$ is a bit more subtle. Let's just start it out at 10, and see what that looks like for some examples.

This looks pretty reasonable. We can sort of justify C=10 on the basis that 10 games feels like a reasonable amount of padding, but 5 or 50 don't necessarily seem unreasonable either. 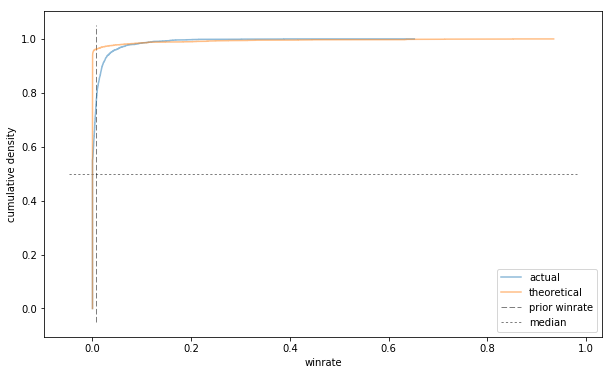 It's a bit hard to tell what's going on here because so much of the action is happening at the far left (as it should - we know that win rates over 10% are exceedingly rare).

Here's the same thing with a log x scale. 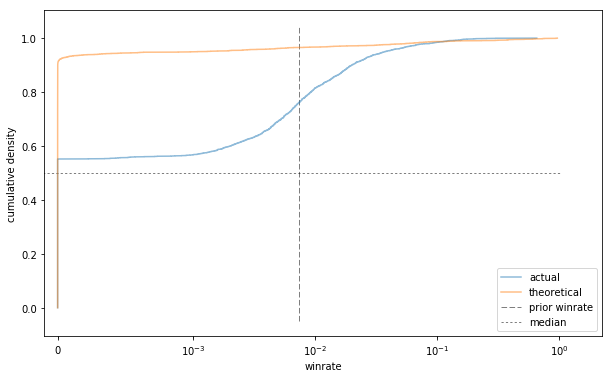 Well that's not very good at all.

To understand what's going on here, it helps to understand the limiting behaviour of the Beta distribution. Small parameter values favour extreme probabilities. As $\alpha$ goes to 0, the density function shoots up around 0. As $\beta$ goes to 0, the density pools around 1. (When both are 0, you get Haldane's prior which looks like a goalpost, with $P(0) = P(1) = .5$, and all other values assigned 0 probability.)

In this case, $\alpha$ is very small, leading to a huge spike around 0. Interestingly, in addition to assigning too much probability to very small win rates, this distribution also assigns more density to win rates near 1 than seems to be appropriate. 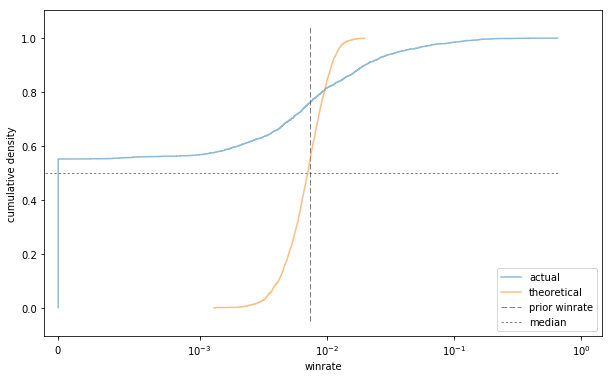 This porridge is too cold!

We're very confident in our 0.74% win rate this time, so we rarely pick any probabilities that stray too far from it. Unlike the previous sample (and the observed data), the sample from this Beta distribution has a median very close to our prior winrate.

(Why is the observed median so low? Because of how it is. It's just a fact that lots of players have never won a game, or rarely win. The overall winrate of 0.74% is misleading, as means often are. The top 1% of players, with winrates over 12%, do a lot to bring up the average (just as the very wealthy may bring up the mean household income well above the median).)

Let's try a few values of C in between. 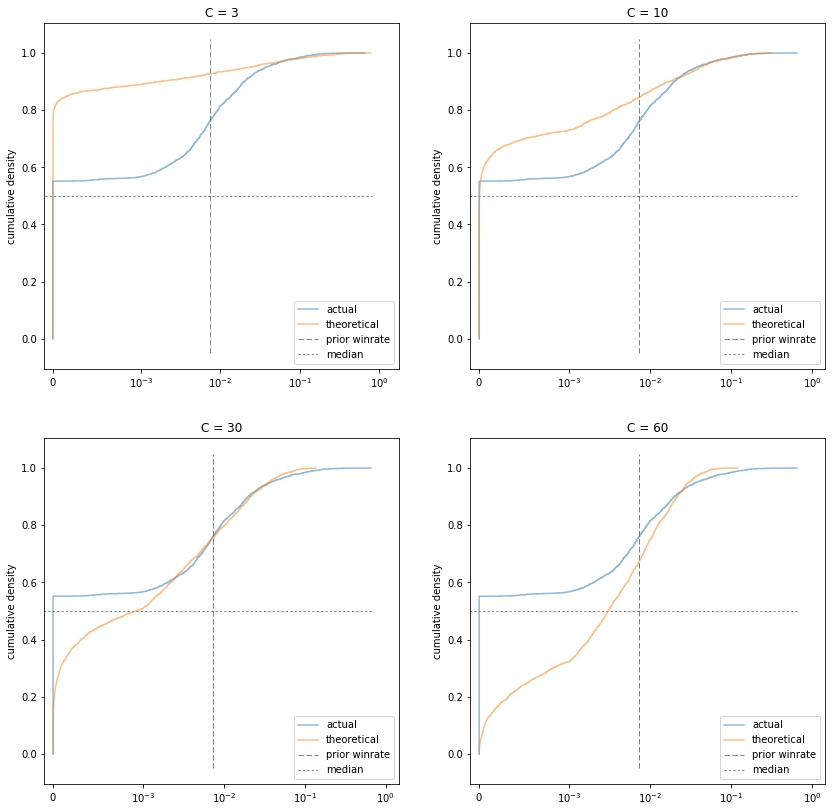 C=30 certainly looks like the winner. And that is in fact the value I ended up using.

Or does it? Remember that the observed win rates are not actual samples from the distribution we're trying to model (the true win rates of DCSS players). They're noisy samples. The noisiness is mostly not a big deal, since we're only looking at players with at least 100 games.

However, if your true win rate is 1 in 1,000, or 1 in 10,000, then your win rate over 100 games will be a very noisy estimate of your true win rate. Our sample has a lot of players with 0% win rates. Lots of those players must have a small but non-zero chance of winning (a monkey randomly mashing the keyboard for eternity would probably win eventually), but those win rates are very hard to measure. (The lowest observed win rate in the data is 1.2e-4, or about 1 in 10,000).

"Try a bunch of different parameter settings, graph some samples from the distribution under those parameters, and choose the one that looks the best" doesn't quite have the ring of scientific rigour to it, but it at least feels better than picking a number out of a hat. The more principled thing to do would be to do gradient descent to approximate the maximum likelihood estimate for C. But that sounds like an ordeal.

Here's the distribution of smoothed winrates across games (assigning to each game the winrate of the corresponding player), compared to raw win rate. 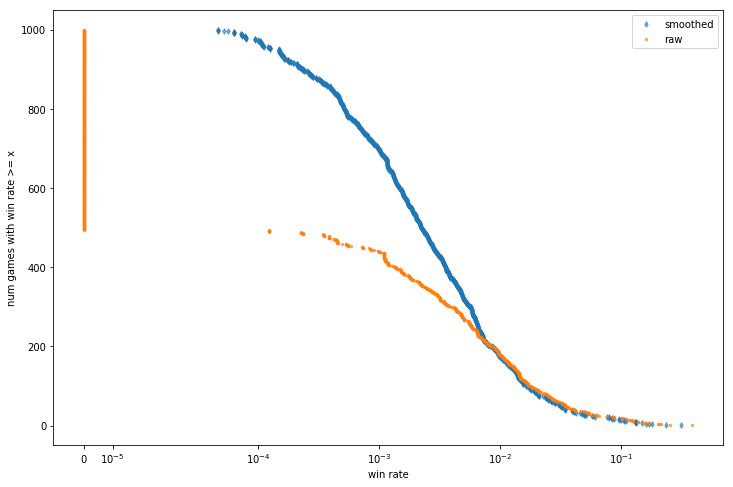