This is a (somewhat boring and technical) accompaniment to my blog post Dreaming of GitHub repositories with RBMs. I was able to find lots of great literature with practical tips on training RBMs (my favourite being Geoff Hinton’s A Practical Guide to Training Restricted Boltzmann Machines), but almost nothing on sampling from them. This may reflect the fact that generative models have more often been used to pretrain discriminative models rather than, y’know, generate stuff.

My hope is that these notes might help out any future ML archaeologists who want to hack around with RBMs. The TL;DR is:

simulated annealing is one honking great idea – let’s do more of that!

(If you’re already familiar with RBMs, feel free to skip this part.)

One of the fundamental operations we can perform on an RBM is called Gibbs sampling.

Here’s an example of how the state of the visible layer evolves during repeated Gibbs sampling. This example uses a model trained on a dataset of geographical place names:

It’s not a coincidence that the energy is going down over time, or that the sample with the lowest energy is the one that looks most like a real name. There’s a connection between how we do sampling and our energy function above. The probability of turning on a particular hidden unit h_j, given a visible vector v is:

Remember how RBMs are trying to learn the distribution of our data? An important property of RBMs is that if we do Gibbs sampling over and over, our samples will approach the model’s estimation of that distribution.

One thing to notice for character-level RBMs in particular is that, for every block of N visible units representing a character, there will always be exactly one unit turned on - the probability we assign to any vector failing this criterion should be 0. We should help the network out by giving it this information for free. We’ll do that by treating each of those blocks as a single ‘softmax’ unit. Rather than sampling each visible binary unit independently, and turning it on with some probability according to the sum of the incoming weights from the hidden layer, we’ll sample using the softmax function.

This isn’t strictly necessary, but I found it to greatly improve the model (in terms of qualitative goodness of samples, and some metrics that correlated well with quality of samples, such as pseudolikelihood).

Once we’ve trained a model, we want to see what kinds of hilarious garbage it dreams up. How do we do that? Well, we know that if we start anywhere and do Gibbs sampling long enough, we’ll get something like the model distribution. There’s even a proof of it in a drawer somewhere! Problem solved, right?

In practice, “long enough” might be a long, long time for some models. An RBM (or, more generally, any Markov chain) that takes a long time to converge is said to have a low mixing rate. Such models may wallow in valleys of (locally) low energy for a long time, and be very sensitive to initial conditions.

Here’s (ugly HTML table warning) what a well-behaved model looks like. Each row represents a different starting point for the sampling, and each line is a separate “fantasy particle”, sampled in parallel (if you’re curious about the meaning of each row, check out the VisInit enum here). The samples in the final column of each row (representing 10k iterations of sampling) are fairly similar, and there’s no evidence of any particles getting stuck. After 10k iterations, the training examples are substantially transformed.

Here’s what a bad mixing rate looks like. Even after 10k iterations, there are dramatic differences in samples depending on how the chains were started. chunks/silhouettes/train look pretty reasonable, but the chains started from zeroed-out vectors look like noise. Many of the chains started from training examples still look a lot like their starting configuration - e.g. “carleton pond dam” -> “greslocd ponn dam”, “southwestern college” -> “southordoure college”).

One way to avoid the second scenario is to introduce a weight cost to discourage large weights, which are associated with poor mixing rates.

Let’s consider a sample from our well-behaved model: “goon remetery”. Ouch, so close. But remember that our procedure for sampling the visible units is stochastic. It may be that we had P(“r”) = 0.1, P(“c”)=0.8 for index 5, and that we just got unlucky. To maximize the quality of our samples, we could sample determnistically at the very last round of sampling, always taking the character with the highest probability.

This is actually how I drew samples initially, until a friend pointed out to me that this is actually a (trivial) special case of simulated annealing. To take it further, we’ll need to introduce the concept of “temperature” to the sampling process:

A low temperature has the effect of “sharpening” the probability distribution, with the rich getting richer and the poor getting poorer. T=0 leads to exactly the procedure we described earlier where we always take the character with the highest score.

We can draw our samples with simulated annealing by starting our chain at a high temperature and gradually lowering it. This is appealing for a few reasons:

Firstly, it defeats models with low mixing rates. Recall that our problem was fantasy particles stubbornly lying in local valleys. Turning up the heat will bounce them out and encourage them to explore other regions.

It also lets us draw samples with much lower energy than what we would get from repeated Gibbs sampling at T=1 - even after many iterations. And low energy samples tend to be qualitatively superior. We can no longer pretend that we’re trying to draw from exactly the model distribution - we may be drawing from a sharpened version of that distribution that favours especially probable points. In practice, we’re totally cool with this, as long as we still get some reasonable variety.

Here are some samples drawn after 1000 rounds of Gibbs sampling on a model trained on GitHub repository names:

Here are samples from the same model, with the same number of iterations, but annealing from T=1.5 to T=0.2:

Wow! Quite the difference. 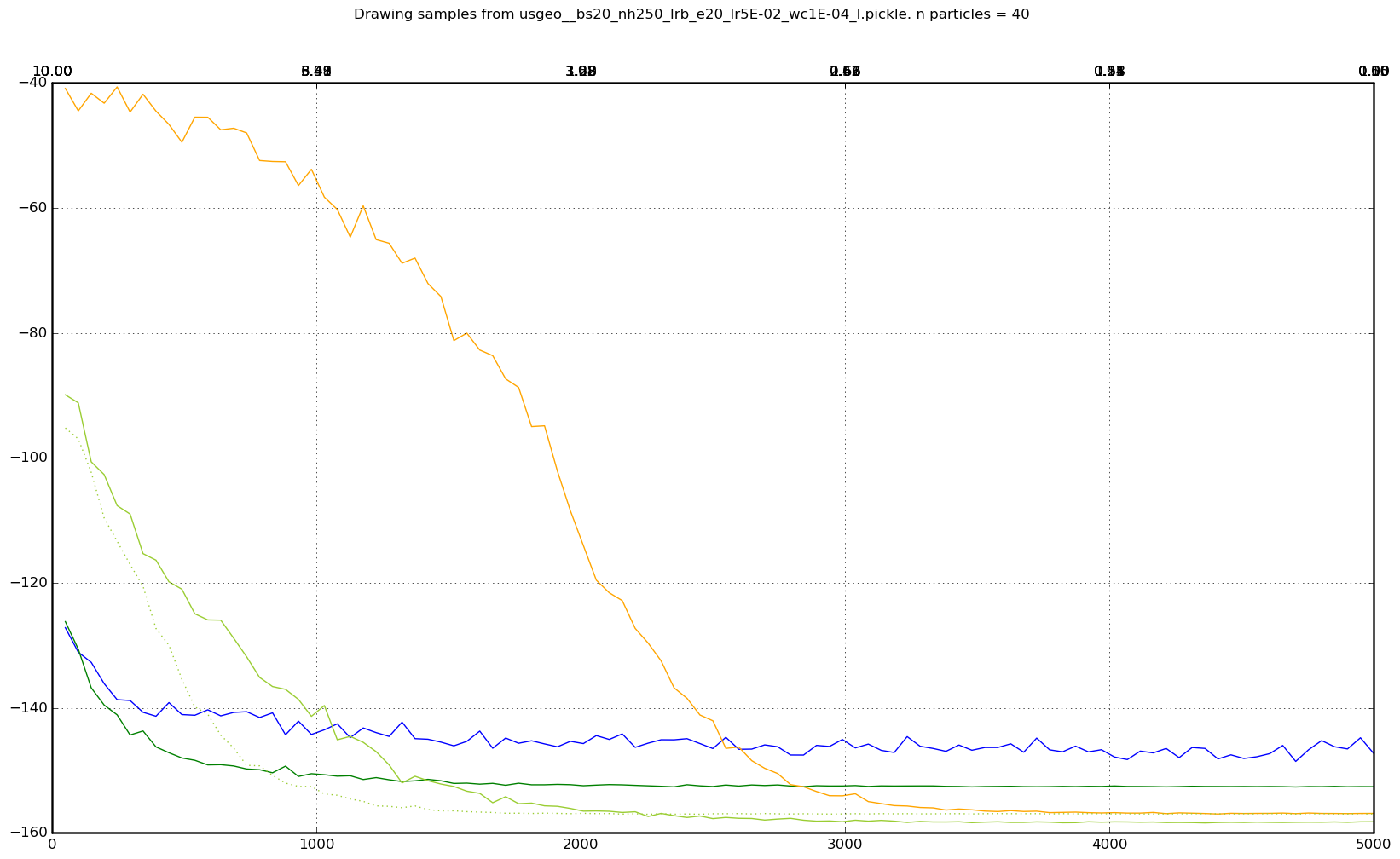 Apologies for the messiness. It probably would have been a good idea to label the lines, because I definitely can’t remember the temperatures associated with each of those lines (but higher y-intercept -> higher starting temperature, steeper slope -> lower ending temperature). The important thing here is that the blue line is with no annealing. So pretty much any reasonable annealing schedule trounces vanilla Gibbs sampling, if your goal is to get lower energy samples.

But getting low energy samples is probably not all you care about. Often a gentle annealing schedule will give the lowest average energy, but lead to very low sample diversity. For example, here are some samples taken over a gentle annealing period from a model trained on names:

At this point, we’ve probably sharpened the distribution too much. We probably want to cool a bit faster to before every particle has had a chance to fall into the valley of the Lees.

For reasons like this, I relied pretty much entirely on visual inspection of samples when choosing annealing schedules.